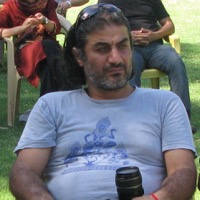 Zaradasht Ahmed is a Norwegian-Kurdish Film maker. Has background as an artist and a journalist. He graduated from the University of Stavanger and has a BA in TV and multimedia prod. 2006. In 1997 He finished his education in visual art at Rogaland School of Art. Worked with several artists, dancing companies, and freelancing for TV as a photographer and editor. He works primarily as a documentary filmmaker, and has directed films like Persecuted (2008), The Road to Diyarbekir (2010) and Fata Morgana (2013). The award-winning documentary “The Road to Diyarbekir” 56', shown on SVT Sweden, TV2 Norway, ARTE Germany/France, Doc Lounge web TV YLE Finland, NTO/VPRO Netherlands, STVDIO Australia. As a film maker he has extensive experience in the Middle East, North Africa and Asia/south East Asia. His last film Fata Morgana 76' feature length documentary, for SVT Sweden, was presented at Eurodok in Oslo, 2013, as well as most festivals in Norway. Nowhere to Hide is his ongoing film project.