ZERO IMPUNITY is a transmedia project developed as a mediatic weapon to fight impunity related to sexual violences. The investigation plunges us into today’s most effective weapon of war and highlights new revelations.

ZERO IMPUNITY is a transmedia that decrypts sexual violence as a weapon of war. ZERO IMPUNITY offers the audience to discover the mechanics of a terror weapon, destructive and insidious, that undermines the prospects for peace and casts a shadow over our collective humanity. By reconciling a powerful narrative and technological innovation, we want to engage the audience in a collective augmented action and so fight together against impunity.

At the heart of ZERO IMPUNITY, 6 investigative reports question the failures within the major international institutions and states making it impossible to fight against sexual violence. Through exclusive testimonies from alert launchers, victims of sexual violence but also assailants, these investigations plunge us into the mechanisms of impunity at work within the UN and the ICC, or in Ukraine, Syria, the United States and France. As of January 3, 2017, the 6 investigations will be progressively published, one by one, by an international media consortium and on the zeroimpunity.com website.

In partnership with Change.org, each investigation is extended by a petition formulating concrete demands, to move the lines. This action campaign will be amplified by the implementation of an innovative digital activism tool: the first 3D interactive march. Each signature will be translated into a 3D spokesperson, in real time, and will become an impacting tool of engagement and viralization. This new form of digital activism will take on an urban guerilla dimension, thanks to video projections on facades in strategic spaces.

The documentary animation film "As Rare As Roses On Icebergs" (70′) will conclude the ZERO IMPUNITY transmedia project. Through a cinematographic approach and an original production, the film highlights the words of the victims while putting into perspective the stakes of a sclerotic international justice. 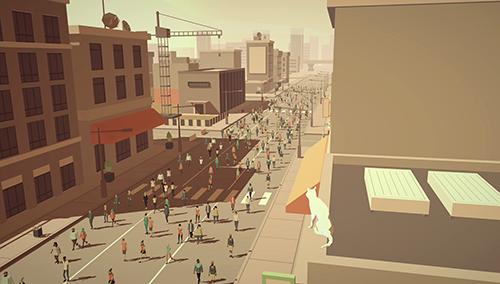 Winner of FIPA D'OR 2017 in the section SMART FIPA