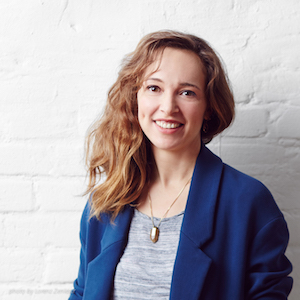 As a Creative Producer at the Interactive Media Foundation Maya Puig Eriksson is responsible for large-scale interactive projects.

She develops ideas and inspires and leads international and cross-disciplinary teams to implement them energetically, creatively and successfully. Be it in projects such as the filmArche in Berlin - the largest self-organized film school in Europe, which she co-founded in 2001 and whose learning and teaching concept she shaped during her 5 years as head of the directing department; or the European network of young filmmakers Nisi Masa, on whose board she worked for two years, during which she conceived and implemented multiple international workshops.

Through stations in São Paulo, London and Berlin, the polyglot director, who completed her master's degree at the London Film School, discovered her passion for narration in the digital world and immediately put it into action: the artistic re-interpretation of Mozart's Magic Flute – „The Land of the Magic Flute“ - has garnered international acclaim and has won many awards, including the Lovie Award, the Webby Award, the Japan Media Arts Festival Prize and the Digita.

She directed the interactive comic on anorexia "Ninette - thin is not thin enough", which was supported by the Federal Ministry of Health and is actively used in preventive work in German-speaking countries.

For BAUHAUS SPIRIT Maya Puig Eriksson developed the crossmedia part and leads the team of the Virtual Reality Installation "The Total Dance Theatre".