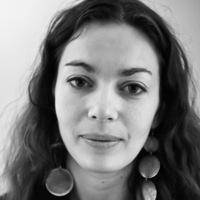 Lucija Stojevic has worked in both short and long format documentary film since 2006. She is the director and producer of the independent feature length documentary “Riba Ribi Grize Rep” (A Fish Bites a Fish’s Tail, 2006) and has worked on a number of international documentaries as assistant director and co-production partner.
She independently produced over 30 short format documentaries for The Guardian, The New York Times and Global Post and continues working for them on a regular basis. Her work has also been displayed in the context of video art in exhibitions in Vienna and Graz (Austria), Screens of Barcelona/LOOP Festival (Spain) and The Edinburgh Fringe Festival (UK).